Growing up as a city kid, I regarded any plant that bloomed as beautiful and “good,” a worthy specimen, a garden treasure. I knew better than to pick the flowers my mom cultivated in our backyard borders but the yellow dandelions in the grass were fair game and she kindly received many a droopy bouquet from me. Had garlic mustard been blooming in my Chicago yard, I’m sure I would have been just as enamored with it as I was with the violets, lilies-of-the valley and peonies that popped up in our yard every year. 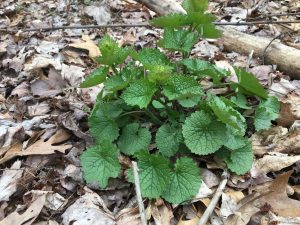 The garlic mustard (Alliaria petiolate) plant is not unattractive to the innocent eye, with its delicate white flowers and bright green leaves, which appear before most other plants in the spring. But I now know just how destructive something that looks so pretty and innocuous can be.

According to The Nature Conservancy, garlic mustard was brought from Europe to North America in the 1800s for “herbal and medicinal uses and erosion control.” A well-meaning introduction, which unfortunately has led to devastating ecological consequences. Garlic mustard emerges here in Indiana fields, roadsides and forests earlier in the spring than many native plants. So when native species are ready to make their spring appearance, garlic mustard has blocked their sunlight and hoarded moisture and nutrients vital for growth. Alarmingly, this battle occurs not just with other plants on the forest floor. According to TNC, invasive species like garlic mustard that crowd out forest ecosystems hurt insects and other organisms that depend on a healthy understory.” Deer avoid garlic mustard, which helps encourage its proliferation and reduces the number of plants deer and other wildlife rely on for food. Garlic mustard also releases compounds into the soil that can also inhibit trees (which store large amounts of carbon dioxide) from growing.

Basically, the entire ecosystem is weakened by garlic mustard. Yikes.

The good news is it’s not impossible to eradicate garlic mustard. It has features that make it easy to identify. From the Beverly Shores Environmental Restoration Group’s website: “You can recognize first year plants as green rosettes with kidney-shaped leaves that have serrated edges. Second year plants throw up stalks several feet tall that have triangular leaves and are capped with clusters of four-petaled flowers.” Garlic mustard is edible, although I haven’t yet tried it. I imagine it would taste pleasant to people who like garlic, as its garlic fragrance is strong when broken or pulled.

With a little patience and persistence, it’s easy to help reduce the garlic mustard population and make way for native species to flourish again. What’s more, it’s not difficult, backbreaking work like, say, removing mature Privets and massive tangles of Oriental Bittersweet from your yard. (Can you tell how I spent some of my early spring weekends?) In just a few minutes you can pull a satisfyingly large pile. In fact, if you’re like me and are looking for ways to reduce screen time, you can even make a friendly competition out of it! Last spring as the reality of the pandemic hit and my two college kids realized they would not be returning to their campuses, our family spent a day together outdoors, each leading some family-friendly activities. I’d recently noticed a large patch of garlic mustard running rampant up the road, so I proposed a contest to see who could pull the most plants in 60 seconds. I would tally up the piles after a minute, and only plants with the complete root system intact would be counted, as that is the only way to be effective in removing the plant. Once we got started, it was easy to continue until all the offending plants in sight were gone, and quickly. All that was left to do was dispose of it in plastic bags, to prevent the seeds from dispersing. If four people could make such a difference in less than an hour, imagine how effective a larger, community-wide effort could be. 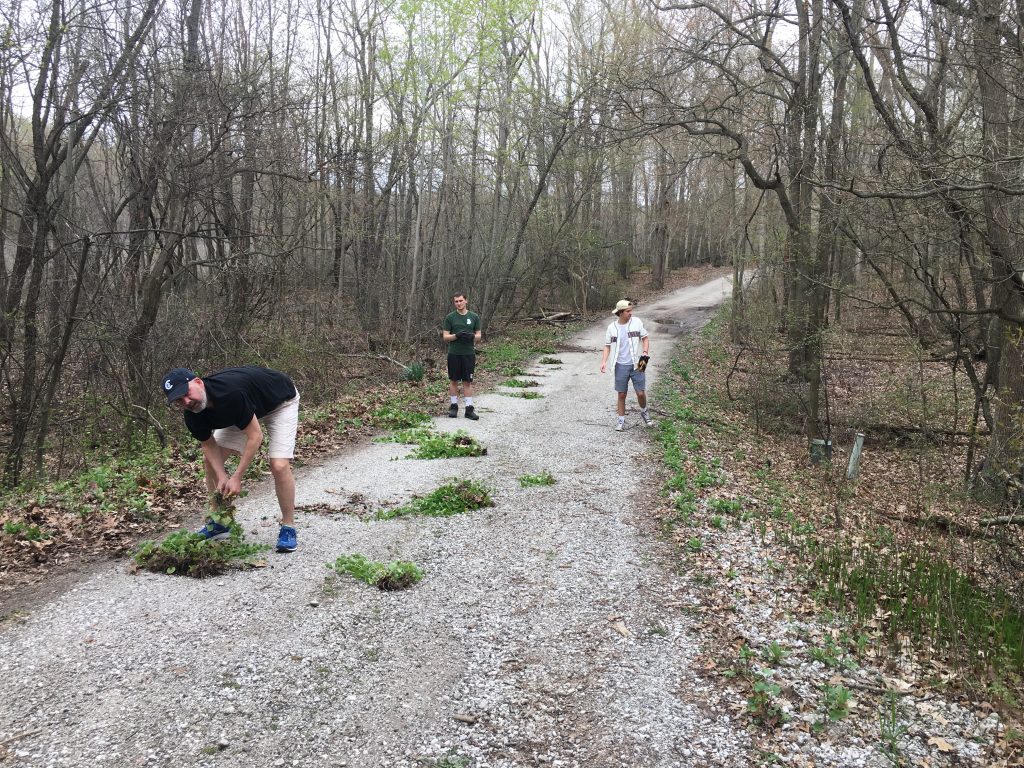 I’m happy to report that our efforts seem successful: this year that particular roadside has next to no garlic mustard plants. I’ve seen plenty of it elsewhere, though, and I carry bags to fill when I go on walks in the spring. The plants are extra easy to pull after a rain, when the ground is extra soft. And you might even encounter an unexpected treasure, like I did recently. While stepping into a pile of leaf litter to grab a stray garlic mustard plant, I stepped on something distinctly squishy – two morel mushrooms, which I have never seen anywhere in the wild, let alone just a few steps from my backyard! I put them back where I found them, hoping the wild turkeys I’d seen earlier would find them.

Whatever your motivation – boredom, competitiveness or just a simple wish to say goodbye to the unwelcome invaders in our midst, I highly encourage you to get out there and clear some garlic mustard. The best part is, even if you don’t pull more plants than your highly competitive 19-year-old, everyone ­– from the tiniest insect to the tallest tree – still comes out a winner.