Well, here we are, a little over five months into Shirley Heinze Land Trust’s trail cam monitoring project at Meadowbrook Nature Preserve.  We’re marking Earth Day on the west branch of the tributary of Salt Creek, a waterway that rambles carelessly through the bottomlands of the ancient moraine.  The occasion is attended by the blooming of spring ephemerals that stake their claim at the crest of mossy stream banks.  Mayapples stand up straight and proud in the hopeful sunshine of April’s blush, and skunk cabbage crawls across the rolling lowlands like a sudden army. 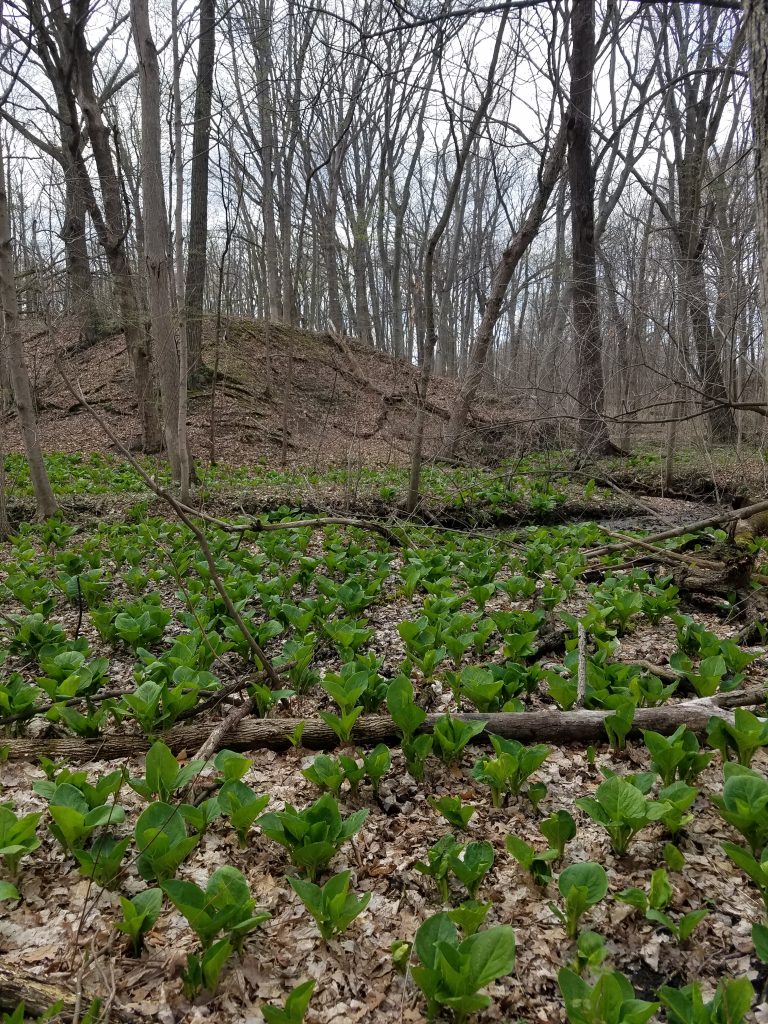 It’s a stark contrast to the winter we’ve just come through, one of the harshest we’ve had in a while in terms of sheer snowfall temperature variation.  At night the possums engaged in a month-long tug-of-war over a raccoon carcass, fumbling in the moonless night as the thermometer stubbornly groped toward zero.  In the daylight, I’d slog through knee-high snow down to the creek.  Sometimes I’d have to dig the camera out before I could pull the SD card.

Eventually, the season’s icy stranglehold broke, giving way to an absolute torrent of meltwater.  It flooded the front of the mink’s den and altered the shape of the creek bed below it, rearranging the substrate like it was shuffling cards.  It was an unforgiving Hoosier winter, the kind we used to have more often.  One might almost be fooled into thinking our local weather patterns were holding strong against a gradual slip into the erratic.

The focus of our project, of course, has been the American mink (Neovison vison), a fascinating and solitary creature that we’ve only recently begun to really observe here at Meadowbrook.  The effort has met with great success.  A month into our project, we captured an image of the mustelid outside its den.  The trail cam has caught the mink during its lonesome prowls on nine different occasions to date.  Sometimes it’s in the early morning hours.  Others, the mink appears at dusk.  Mostly, though, the camera catches it in the middle of the night as it forages for frogs, snails, and fish.

I’ve also seen it again with my own eyes- twice since that first fateful day back in November.  Once, it snuck out of its den right behind me, rustling a few brittle leaves as it emerged.  I turned just in time to see it ambling away with that unique gait, only to disappear into another den entrance.  I was too stunned to catch any photographs myself, but I was able to get a good sense of the critter’s proportions.  It was about the size of a cat.

The next time, I was up at the old Girl Scout overlook off the gravel trail when I happened to catch a furry shape running along the winding creek bed below me.  My hand went down to my hip without much thought, and I was able to deftly swing my camera up, zoom in and focus, and snap a few quick shots as it wandered along the stream’s course.  Its coat was magnificent in the afternoon sunlight, an incomparable russet that belongs only to the mink.

Although the encounter lasted thirty seconds or better, this vibrant mammal was in motion the entire time.  I was tickled to watch it dip into the cool water and swim a short stretch.  I was amazed a few seconds later when it climbed five or six feet up the sheer trunk of a tree and hung out there for a moment before clambering back down.  I didn’t know they could do that.  Each shot I took was on the fly, and I felt like I was chasing the mink with my lens.  But I managed to grab one halfway decent image in the series, which you can see here.  Between that experience and the photos we’ve collected at Sarah’s trail cam, we’ve got fourteen photographs of the critter.  Not bad, I’d say. 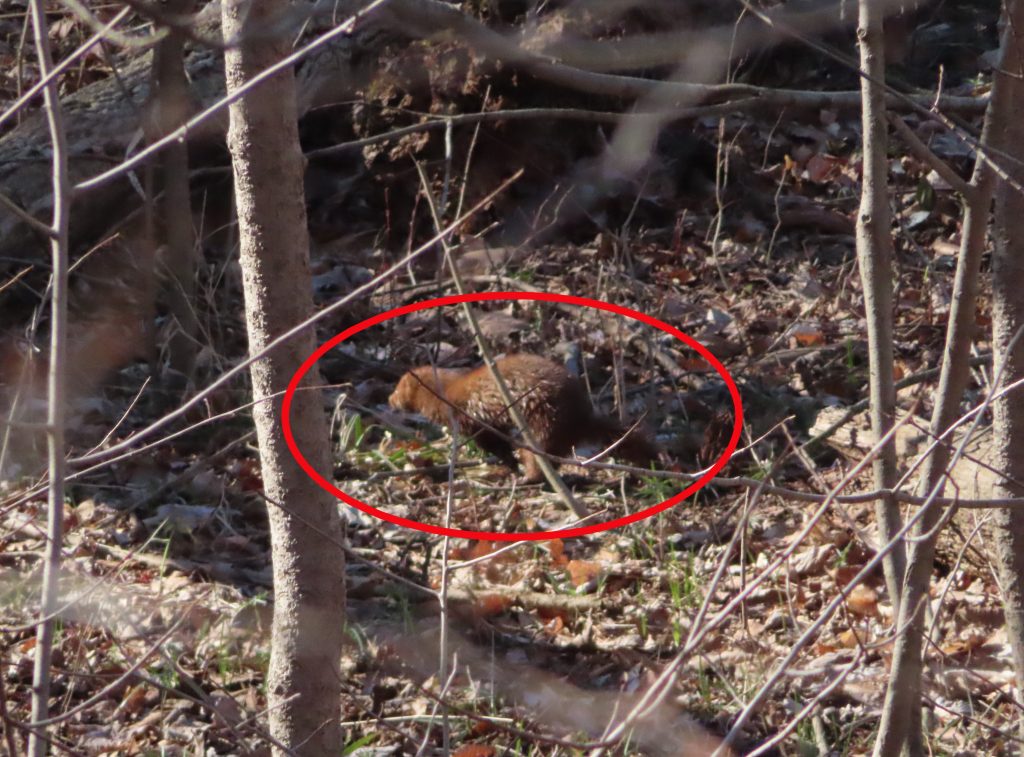 Other efforts and observations related to this project have been just as rewarding.  With the help of Magdalena Gomez, a good friend whom I can always count on to help with creek monitoring, I was able to squeeze in a water quality sampling a few weeks ago.  We counted more organisms upstream than I had so far seen at one time.  Dragonfly and caddisfly nymphs, scuds, sowbugs, and other macroinvertebrates were thriving in abundance just upstream from the mink’s den.  And the still pools scattered at the bends along the creek were squirming with minnows, small and large.  Criteria like that, and the constantly clean chemical readings of the water itself, assure us that our mustelid friend will continue to have a healthy home for years to come.

The trail cam has caught mice, chipmunks and squirrels, raccoons and the industrious ‘possums, even domestic dogs and oblivious hikers.  It’s caught all manner of birds:  woodpeckers, juncos, bluebirds, and cardinals especially.  A Great Blue Heron is a regular down at the site.  We’ve even caught a small owl.  The jury’s still out on whether it was a screech or maybe the Northern Saw-whet that spent the winter further back in the preserve, but there’s no doubt that the mice and voles brought it there.
Just last week, the camera caught a muskrat for the first time.  The rodent was standing just outside of the mink’s den entrance.  What’s interesting about that is that mink, which are not much larger than the muskrat, and definitely not bulkier, seem to particularly relish muskrat.  Mink, cute as they may be, are sleek assassins and will readily take down the rodent if given the chance. 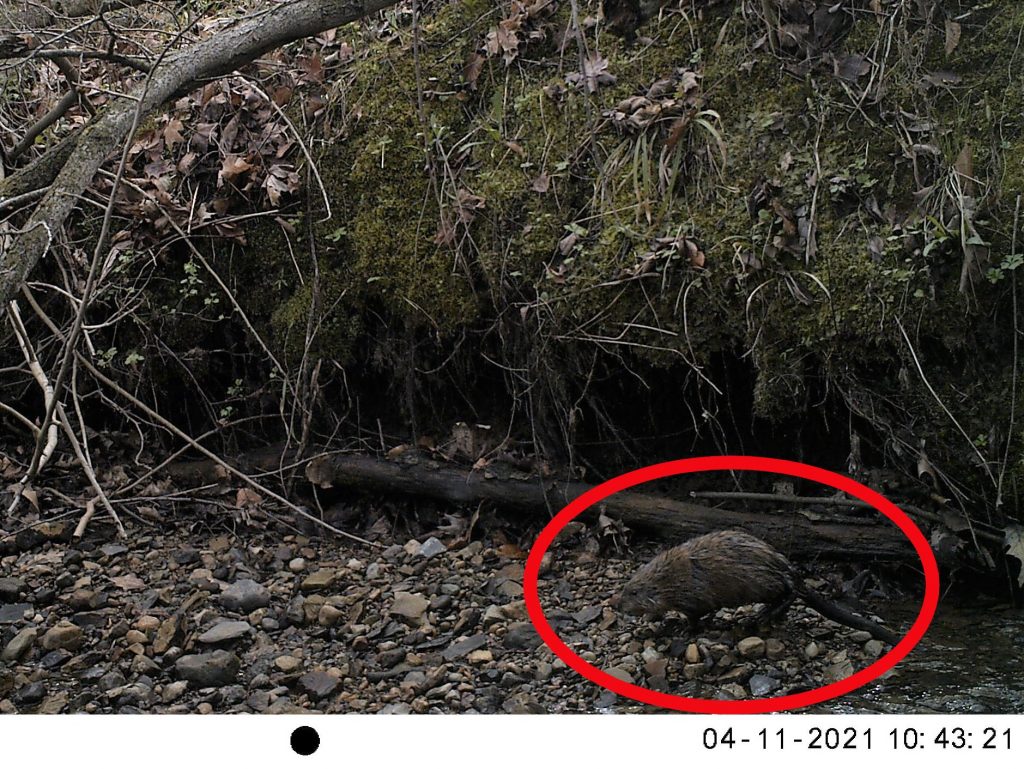 As if this panorama of wildlife weren’t enough, I observed my first freshwater lampreys this past weekend.  They were most likely Brook lampreys, a species native to Indiana.  They’ve been documented in other areas of the Damon Run creek system, but never, to my knowledge, here at the west branch of the tributary.  My daughter was with me, along with some of our friends, and knowing that I shared something this special with them- and especially with her- fills my heart with absolute joy.  It reminds me of another reason that our stewardship and preservation efforts are particularly meaningful. 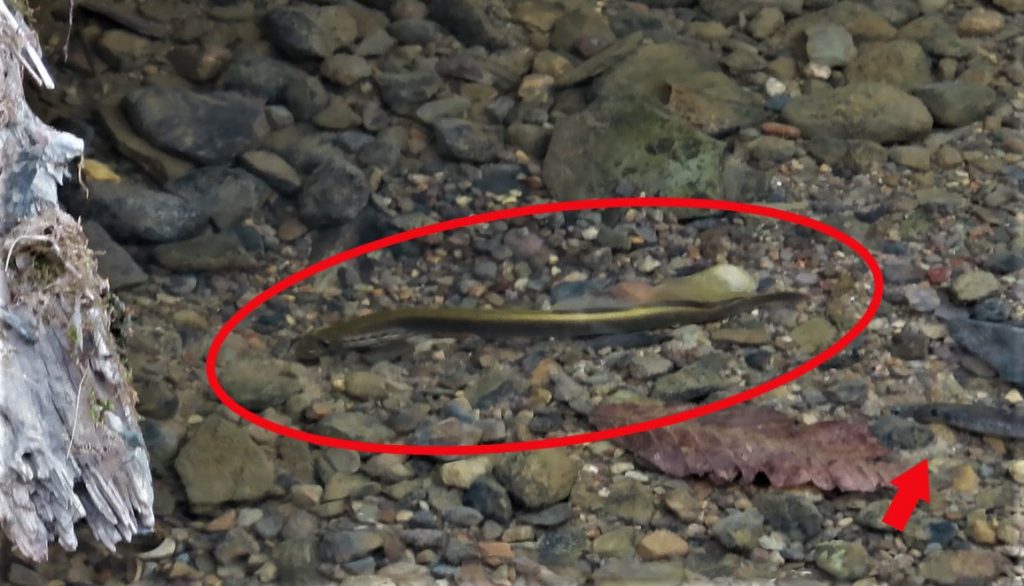 Beyond the ethical responsibility we carry for our land, beyond the scientific impetus for preservation, is something that touches our soul.  This is our legacy to our children.  This is what they will inherit from us, to enjoy and eventually pass down to their children.

Often the challenges ahead seem daunting.  There are challenges to local preservation, challenges to national environmental movements, and challenges to worldwide cooperation over climate action.  How can we get everybody to work in synchronicity?  Yet mine is just a single story, a single experience.  Applied on a global scale, the implications are obvious.  Viewed in this light, with single but collective efforts as individual roots of one gigantic tree, we can really see how our actions do matter.  We can see how the trunk girds itself against the ravages of the elements.  The branches do flourish and grow.  This, then, is how we save our planet.

For me, this is where Shirley Heinze Land Trust excels.  “Bringing nature home,” to borrow a phrase.  Making it personal.  Teaching people about this trillium or that salamander, and then letting them study it.  Showing people how to care for the planet by first caring for the world around them.  Giving people a stake in the land that we share.  And drawing them together to protect it. 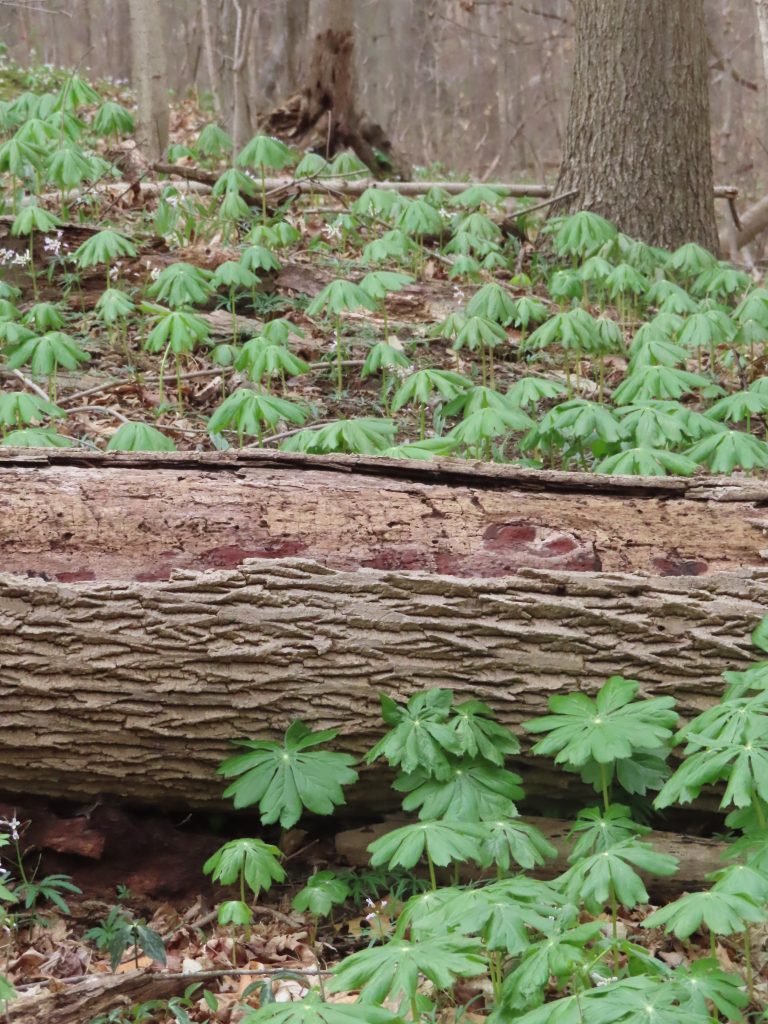