Well, here we are.  It’s the fourth blog already.  Hard to believe it’s been over a month since I started sharing these experiences with you.  They’re the field notes of our ongoing campaign to monitor the American mink along a tributary of Salt Creek that snakes its way through Meadowbrook Nature Preserve.  Shirley Heinze Land Trust has a trail camera set up down in the ravine, right along the creek.  If you’re joining us regularly for this weekly chronicle, thanks for stopping by.  As you know by now, study and stewardship of habitat such as the mink’s helps us to understand and protect the larger ecosystem that we all share. If you need to catch up, start with Part 1!

At this point in the project, we’ve established the general range of wildlife we can expect to see in the images we collect.  We’ve found our mink, confirming first its presence, and then its habitation in a den across from the trail cam.  Most recently, we watched opossums – and even other raccoons – devour a raccoon that happened to die just feet from the camera.  That was a project in and of itself, and it took about three weeks.  We also learned that the days (and the nights) seem to pass a little bit differently down at the creek than they do elsewhere. 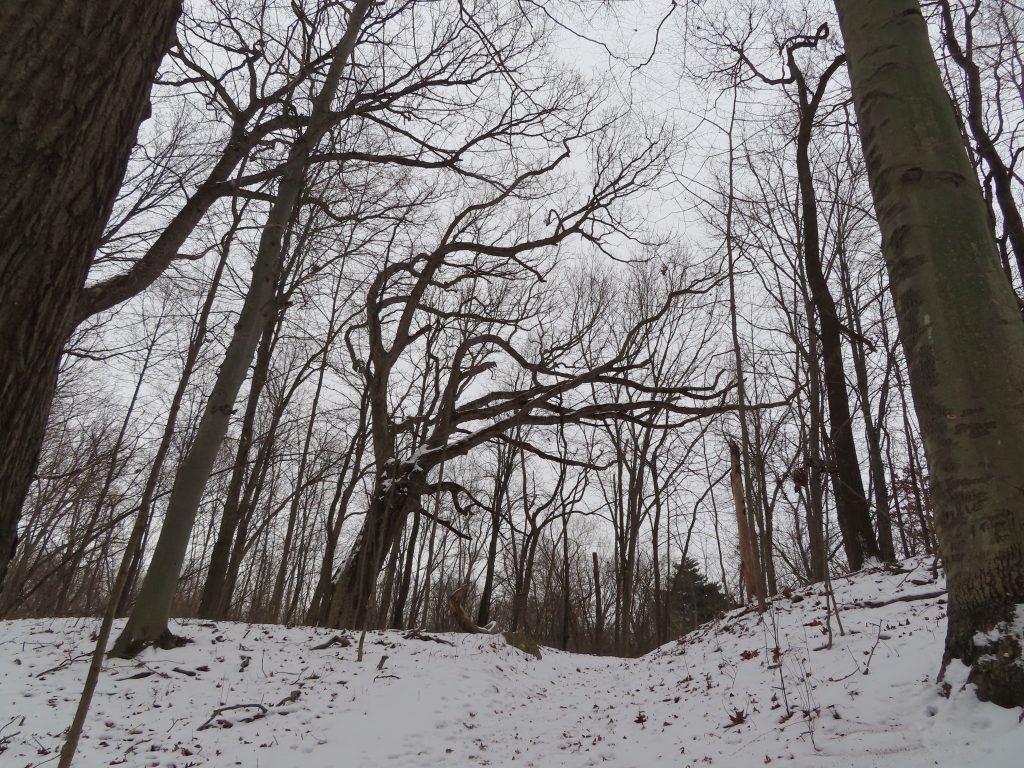 Through January, time flowed on, steady and subtle, like the current unwinding in the shallow creek below the camera.  Before I knew it, the dead raccoon was gone, dispersed, returned to the elements that made it.  The end of the month arrived, and with it, the year’s first big snowstorm.  Most of the time, a healthy layer of snow had covered the ground since before Christmas, but the real show was about to begin.

As I hiked down toward the creek bed, the first tiny flakes began to fall, pushed ahead of a heavy wind out of the west.  It blew through the swaying treetops overhead and issued its hollow diatribe high above the ravine.  Limbs and trunks rubbed together, the wringing hands of bone-cold hobos.  Every so often a high-pitched, lonely sound issued from the dense woods to the north.  It sounded like some great and riotous bird, perched deep among those clattering branches.  All the while, the wind tumbled through the canopy, as if the roaring of surf against the sand dunes up along Lake Michigan was somehow being conducted through the troposphere and broadcast high over the preserve. 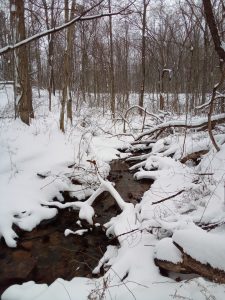 My advice on days like this:  do not come out here hiking or jogging with your headphones on or your earbuds planted.  Every creak, every crack, every pop can serve as a warning.  She talks to you, the forest, if she knows you’re listening.  A lot of these trees are old, and I’ve seen some mighty limbs and trunks fall after just about every windy stretch or substantial snowfall.  If it gets bad enough, whole trees go down.  It happened right next to me once.  The tree smashed a section of a wooden staircase like it was made out of toothpicks.  A few years later, I watched one fall from a distance.  A TALL one.  The whole crown disappeared into the forest canopy like the mast of a ship slipping down into the greenish depths, swallowed in a matter of seconds.

Now I listened to the trees strain and groan against each other and continued along the trail.  A whole host of songbirds came to greet me as I neared the water.  A few perched on some thin branches just above me: chickadees and a bluebird.  Ten paces forward and two nuthatches arrived, gamboling between some trees at trail’s edge.  A Hairy Woodpecker rounded out the welcome wagon, its squeaking, greasy call note cutting sharp through the frigid air. 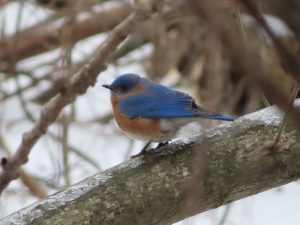 I sometimes wonder if any of them recognize me.  The bluebirds do, I think.  I like to say that we go way back, the bluebirds and I, and I mean it.  Lately they’ve been appearing just ahead of me as I approach the camera setup.  They’ll be perched on a low-flung branch, little azure sentinels, staying just out of reach, keeping an eye on me.  It’s hard not to feel like they’re guiding me or maybe watching over the creek.

There’s a beauty in this place for all seasons.  Hikers, birders, and outdoor enthusiasts come here in droves for the spring ephemerals, or summer’s lazy enchantments, or autumn’s flaming blush.  But the winter is particularly captivating at Meadowbrook.  You get to where you can see the land’s private heart.  I enjoy fair weather and the warmth of the sun, but my brooding Celtic soul craves scenery like this:  plush and fat with snow, stark and severe in its tranquility. 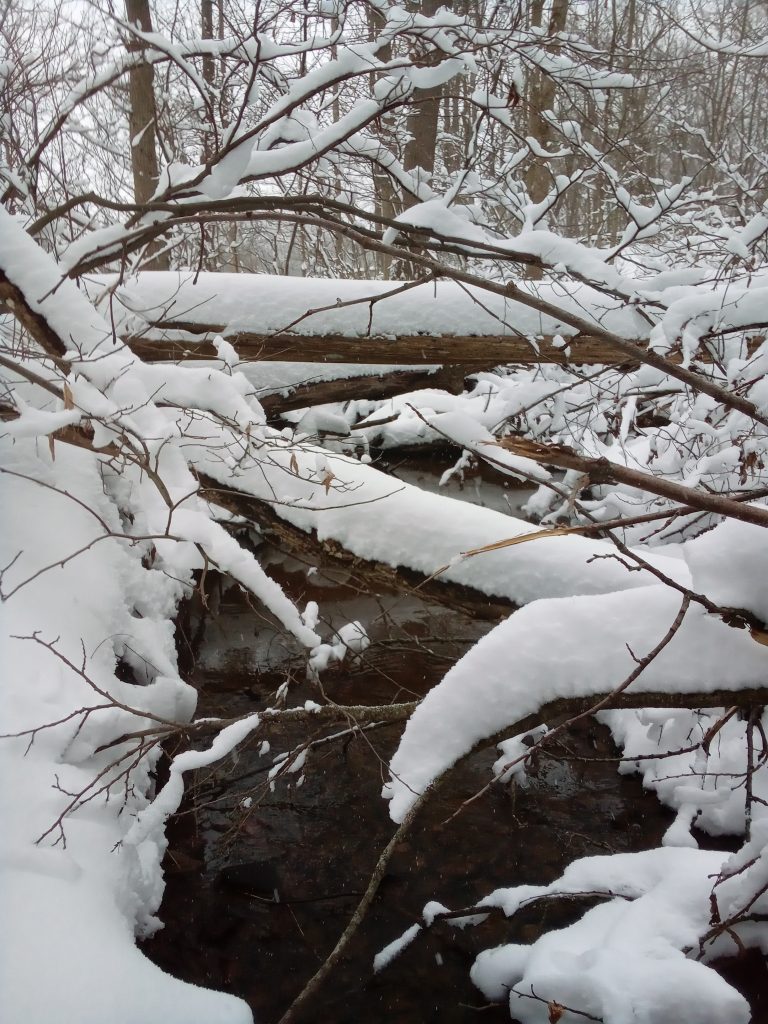 Dragging my focus back to the task before me, I pulled the SD card from my camera so it would be ready.  The biting cold was uncomfortable, but my procedure requires more finesse than I can manage with gloves on.  So it has to be quick, and precise.  I don’t much care for frostbite and can’t afford to drop either card into the snow.

I swapped the cards out, wondering what surprises there might be for us this time around.  Normally I like to download the images in the field:  straight to my phone and then onto my laptop once I get home.  But my phone was being repaired and the corresponding app I used wasn’t working properly on my loaner.  That meant I’d have to come back the following day to switch the cards back.  No big deal.  Really, what it meant was I got to hike back down to the creek again.  Twist my arm.

Far from the feeding frenzy of the past few weeks, the action on the card this time was a lot more subdued.  The ‘possums were still the most frequent visitors, and that juggernaut of a raccoon (the one I like to call “Old Granddad”) was back.  A mouse, vole, or shrew zipped through two consecutive frames and was gone.  Yet a whole series of images taken during the daylight hours didn’t reveal much of anything.  My wife and I examined the images closely and still couldn’t figure out what was tripping the camera.  Might have been something as inconsequential as leaves stirring in the breeze. 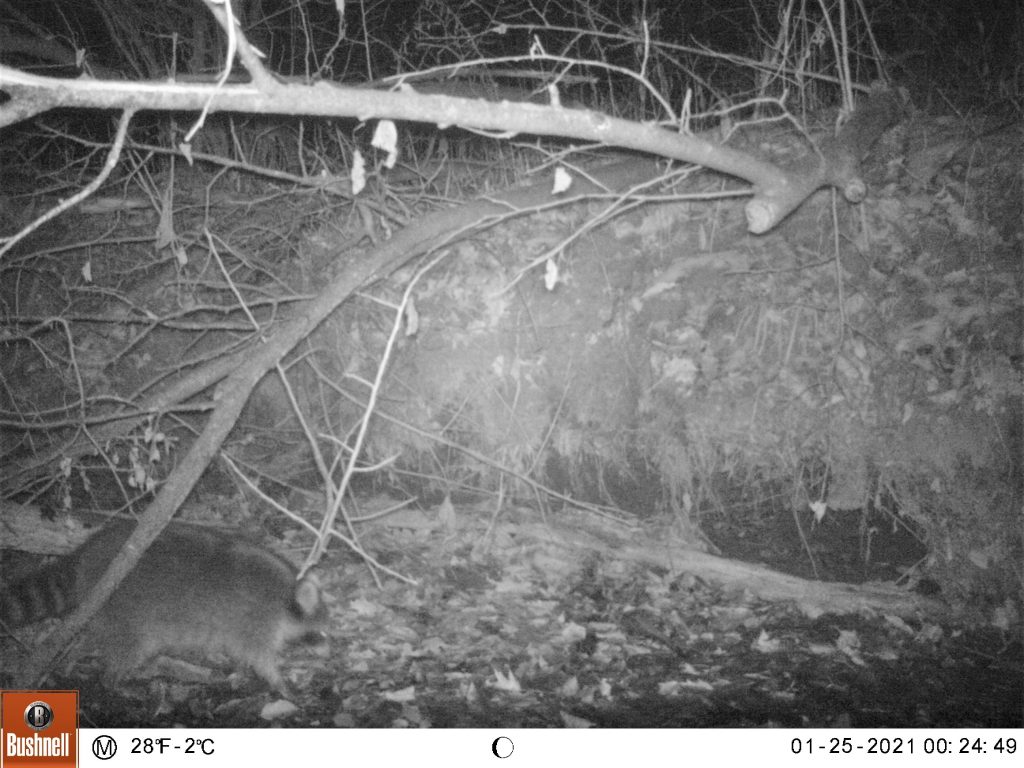 And then we caught our subject again. 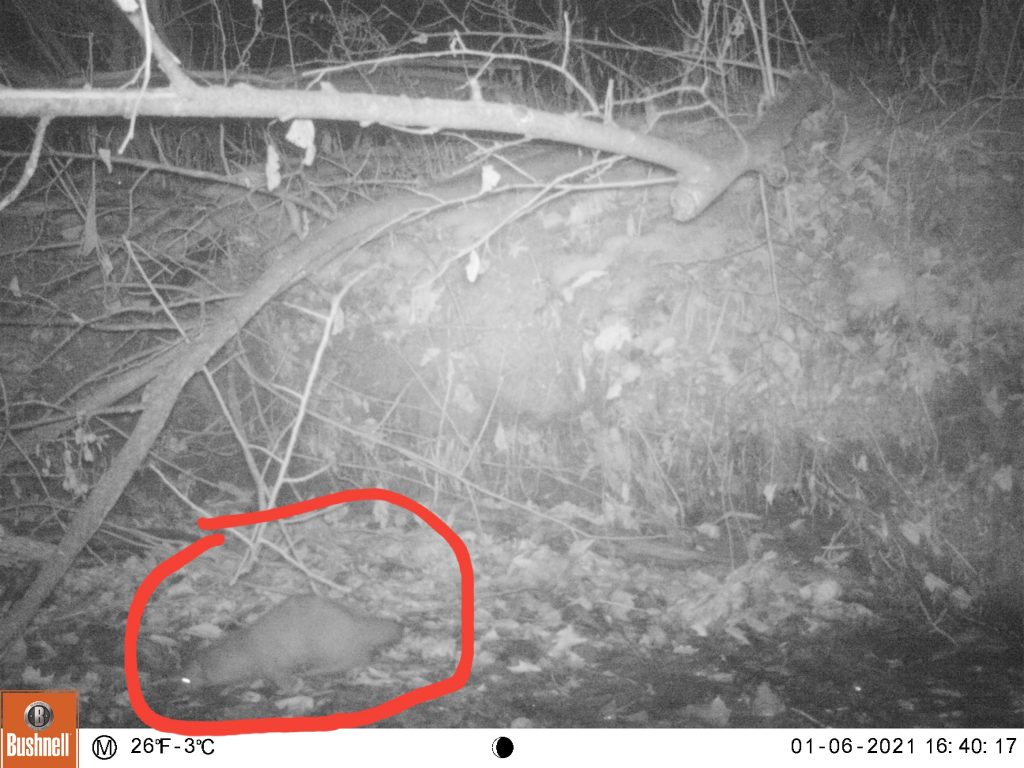 We’d caught it back on the 6th for the first time since it poked its head out of its den after the raccoon died.  It was a nice shot, our best yet, with the mink in the foreground sniffing at the rocks in the creek bed.  It didn’t show up again until the evening of the 24th.  At a few minutes past seven, the camera caught it slinking beneath the large fallen limb that overhangs the bank across the creek.  This shot wasn’t all that great.  The mustelid was partially obscured by the branch, and it wasn’t as close to the camera as last time.  It looked pretty grainy. 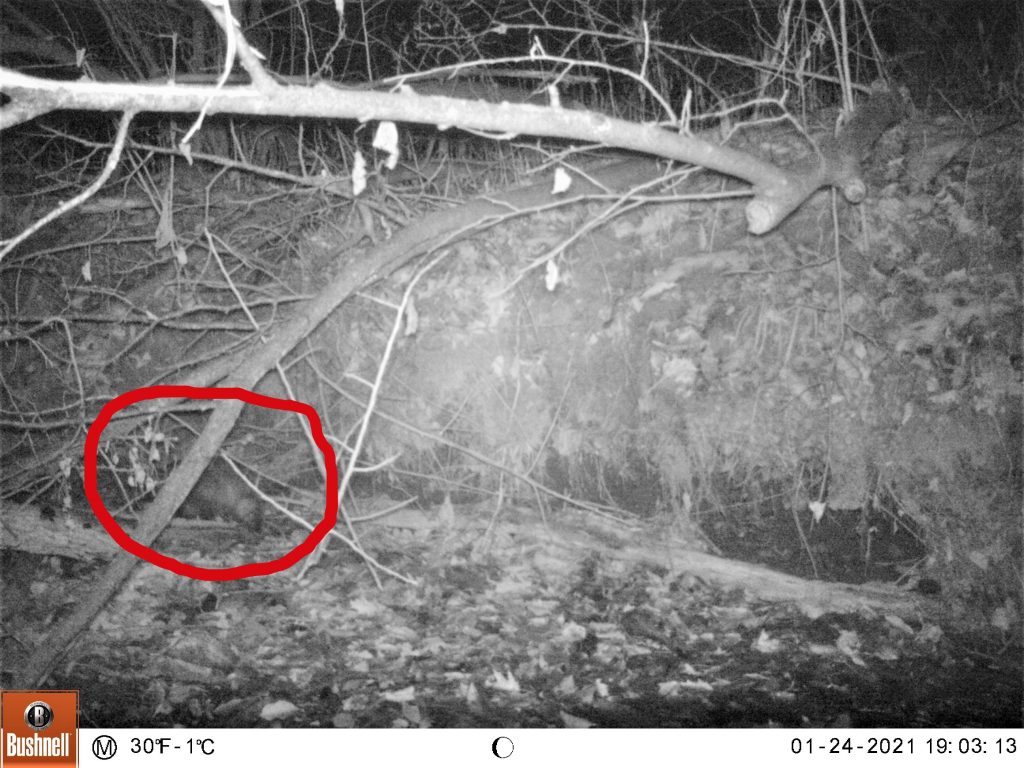 Two days later we hit paydirt.  We caught our subject out in the daylight.  This time the mink tripped the camera at about eight thirty in the morning.  It appeared to have some kind of prey snatched up in its mouth.  The mink had been moving pretty fast when the camera snapped the photo; we could tell by the blurry outline.  But the natural light made up for that.  It allowed the fresh coat of snow that had just fallen to contrast against the brownish tint of the mammal’s fur.  This was now the fifth photograph of the mink.  I was tickled with our continued success. 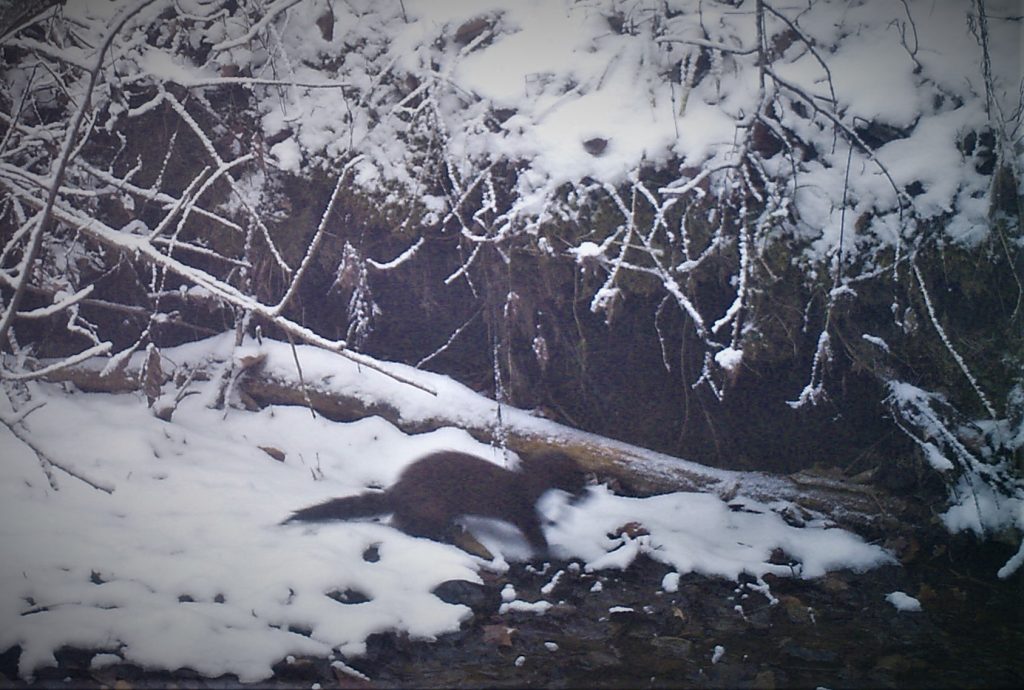 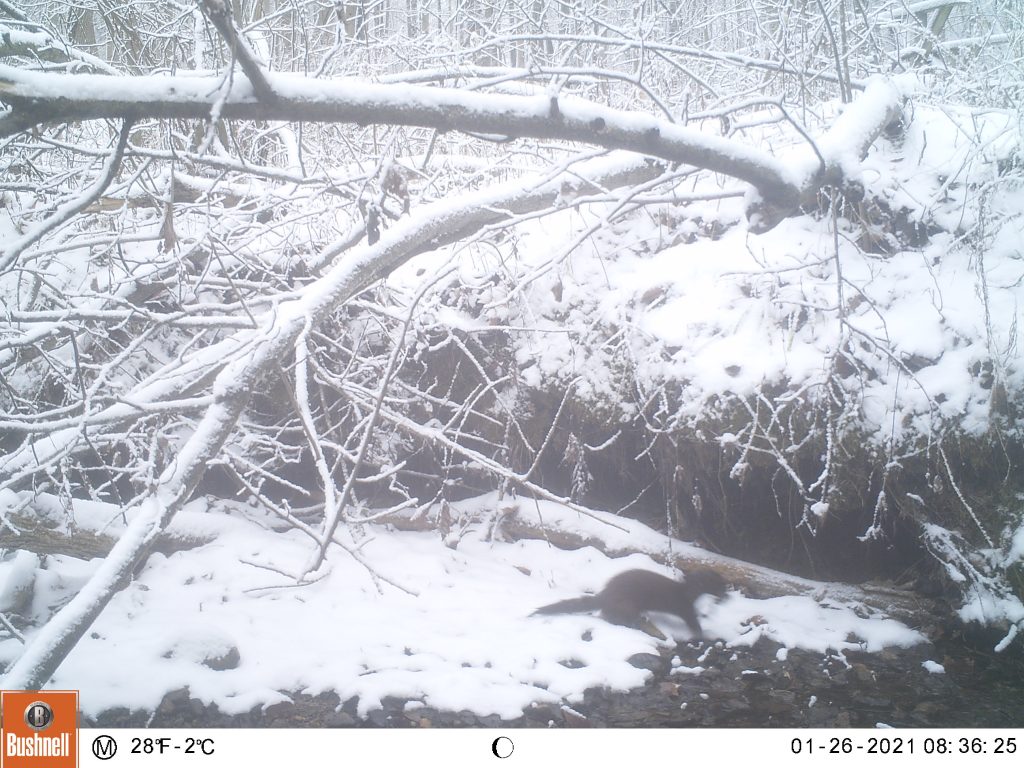 The next afternoon I went back to exchange the cards.  It was a real workout.  I had to wade through some pretty substantial drifts on my way down to the creek.  Then as I descended the bank, my foothold gave out.  Weakened and worn, the icy mud just crumbled beneath me.  I very nearly fell in the creek.  That would have made for a miserable hike back out to my car in this kind of weather.  I’d rather that, though, than to drop the SD card, my camera, or my phone into the creek.  That kind of misery would last longer than the walk back.

When I found the trail cam it was covered by twenty-four hours’ worth of snow.  I had to dig it out before I could pull the card.  For all I knew, it would be buried again in another twenty-four.  I had to work fast; my fingers were getting sluggish from the cold.  My mustache was damp with condensation and I was desperately hoarding warmth under my coat the way a bird traps heat in its down feathers.  But, you know, I’m thankful for all of it.  I love every minute.

I didn’t know it then, but it would be three weeks before I’d be able to return to the creek.  This was partly due to my schedule, but the weather took care of the rest.  We had a brutal and protracted cold snap bearing down on us, a glacial air mass spilling down from the Arctic to spread across the Great Lakes and the Midwest.  More snow was on its way, too.  Weeks of it.  This was becoming the kind of winter the old-timers talked about, the kind we hadn’t seen around here these past few years.

Making sure the card was installed properly, I checked the camera’s clock, slid the switch to the “on” position, closed the housing, and latched it.  Then I climbed the bank again.  I said a silent prayer for all the creatures fighting for survival at the creek in these cold and lean times, and then I made my way back up the trail.  The sun would be setting soon enough.