As I mentioned in my first blog entry, we are in search of the American Mink (Neovison vison).  In case you missed it, I wrote about a few random encounters that led to the initiation of a creekside monitoring project, enlisting the use of a trail cam in order to capture this elusive creature in a photograph.  Or, hopefully, multiple photographs over an extended period of time.

My second report from the field is an exciting one.

Along with a few other interesting creatures and observations, we finally caught our mink on camera.  At a little past seven on a chilly December morning, the little creature walked right into frame, creeping along a fallen branch lying at water’s edge.  The branch is just outside its den, underlining the threshold like a front stoop.  The date was the seventh- a month exactly since I’d seen it with my own eyes in roughly the same spot.

It was a real thrill to see our hopeful suspicions confirmed, and our efforts rewarded so handsomely.  I was standing near the creek, reviewing the previous week’s images I’d downloaded onto my phone.  I couldn’t help but sigh in awe as the tiny shadows and leaves on the screen resolved themselves into what my naturalist friend Finn would call that “mustelid shape.”  I hope it didn’t scare the little critter, dozing deep in its den by now.  But this was a victory.

It all matched:  the elongated body, the size, and especially the tail.  That bottlebrush shape, I’ve learned, is distinctive, and helps to differentiate the mammal from other types at a glance.  It’s definitely not a squirrel’s tail.  It’s darker than the rest of the body, too- almost black at the tip.

I mentioned in the first post that the mink will eat frogs, fish, and crustaceans that it finds in the creek.  It will also eat mice and birds.  I’ve read that mink will even kill muskrat, which can outweigh a mink considerably.  In fact, I also read that they prefer muskrat.  How true that is, I don’t know, but the mink definitely has a reputation as a skilled hunter and fearless fighter.

Since we’ve secured proof of the mink’s existence in the creek at Meadowbrook, I’ve been asked if that means there are more.

There could be more in the preserve, but I think they’d likely be pretty spread out.  The male mink is a relatively solitary creature.  It will not tolerate other males in its territory.  It will, however, overlap with that of a female.  So in general, any population Meadowbrook may support wouldn’t be especially dense.

As I mentioned in my last post, the documentation of mink at the preserve is a big deal.  Noted on the IUCN’s inclusive Red List as a species of “least concern,” the mink isn’t rare by any stretch.  But it does add another interesting chapter to the property’s diverse catalog of wildlife.  Its presence is another reason to continue our water monitoring efforts- and others like it- to preserve and enhance the quality of life for all resident species. 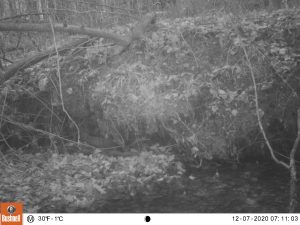 These photos show the first shot of a mink that the monitoring project has captured.  Here we have the original image, and then an edited image, with the lighting artificially adjusted along with the contrast.  The mink is circled in the second image. 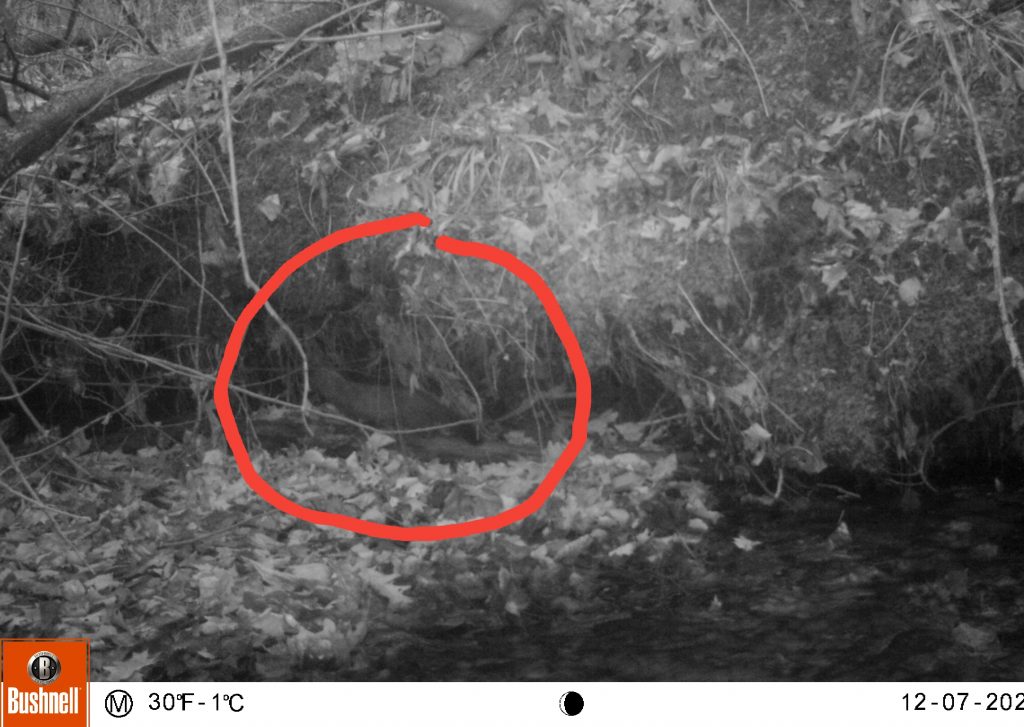 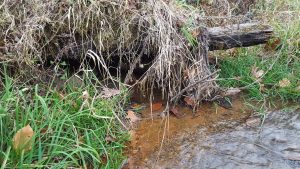 Here is a photo I took of an undercut bank elsewhere on the creek that looks very similar to the one that houses our mink.  It could be another den, for all we know.  The water comes right up to the opening, so there are no tracks or scat to examine as clues. 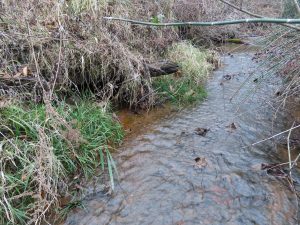 Here’s a shot of that bank’s immediate surroundings, to give you an idea of the typical surroundings of a mink living creekside.

Lastly, an image I borrowed on the Indiana DNR’s website shows what a healthy American Mink looks like in the light of day.

I hope you enjoy this little glimpse into the life of a mink in its habitat.  When you’re on a hike through the woods, remember to observe everything.  Until next time, please be considerate of our own habitat, as well as theirs.

Ultimately, they’re one and the same.