A few scattered reports have come in from around the preserve about a small, furry creature, glimpsed for just a matter of seconds in each instance. One staff member saw it run out from the tall grass as she approached on a riding mower.  Another encountered it running up a trail in the middle of the night during saw-whet owl banding season.

The forest is a strange, solitary place at night, and this little creature is rather odd to see lurching toward you:  long and slender with a knobby little hairbrush of a tail.  It moved fluidly, although sometimes a slight hunch would rise in its back, as if its stubby legs couldn’t quite synchronize with that elongated body.  It definitely wasn’t a raccoon or a ‘possum.  It looked more like a weasel.  Instead of disappearing into the brush or making an escape by darting down toward the creek, this critter kept coming toward her, like it wasn’t intimidated.  Finally, after the witness clapped, stomped the ground, and did everything she could to scare it off the trail, it must have become bored.  It turned away casually, and went off in another direction. Phew.

No one spotted it again for months.

Then, on November seventh of last year, I was down in the ravine at the front of the preserve.  It’s an area defined by high, rolling hills left behind by a colossal glacier as it retreated thousands of years ago.  At the foot of these ancient hills, a meandering tributary of Salt Creek still carves itself into this timeless and dynamic landscape. 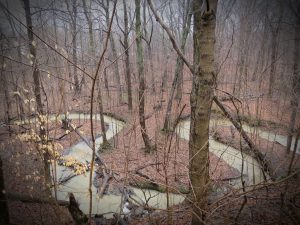 And that’s where I saw it.

I was reading alongside the creek.  Things in the woods were relatively still and there was hardly any birdsong.  Occasionally the harsh cawing of a crow escaped the vacuum of the canopy into the crisp air above.  Suddenly there was motion, a shape.  A hairy brown form disturbed my peripheral vision.  It was clambering across a fallen branch at the edge of the stream.  I raised my head just in time to catch a stunted, blackish tail disappearing into the bank below me.  Actually, there was a hollow under the bank, just above water level, that looked like it’d be a perfect spot for a den.

At first, I thought it might have been a piney, a relatively common little squirrel around here.  Maybe one of those black varieties I’ve seen down around the Kankakee.  But its body was brown, and too long, the tail too short and blocky.  It had to be something in the weasel family.  At home I did a little digging online and came across some photos of American Mink (Neovison vison).  The images bore out my impression of the tail.  And they’re mustelids, members of the same family as weasels.

I was excited, and told the Programs Manager, Sarah Barnes, all about it.  She also happens to be the one who’d seen the critter in the ravine at night.  She suggested installing a trail camera to try to capture photographs that could confirm its identity.  We’d discussed using trail cams before for other projects.  I offered to help check the images we’d collect.  So Sarah put up the camera, and I started checking it every week.

The more you observe your natural surroundings, the more they become a part of you. 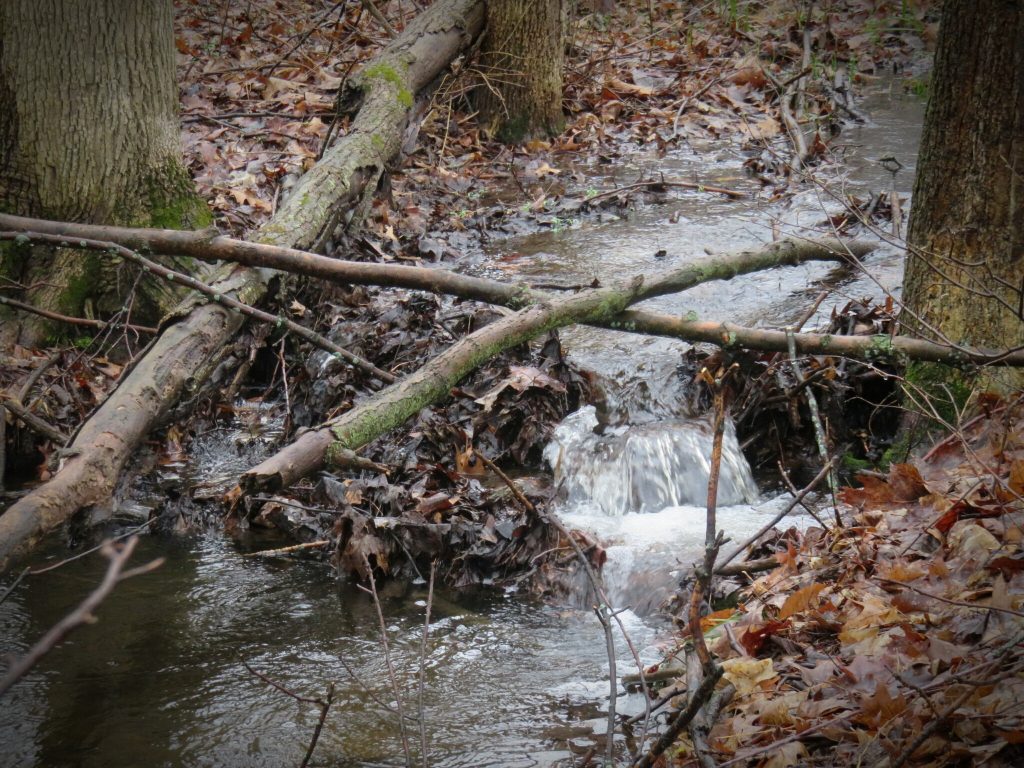 As far as anyone knew, the presence of mink at Meadowbrook hadn’t ever been conclusively established, although it wouldn’t be surprising.  Mink aren’t rare, although people don’t often get to see them.  If we could document the mink, it would add to what we know about the property’s remarkable biodiversity.  It would also show that the water quality in the creek is healthy enough to support the small fish, frogs, and crayfish that can make up a large part of a mink’s diet.  This directly illustrates the importance of our water monitoring efforts at Meadowbrook, and throughout the region.

Although we didn’t catch a mink right away, wildlife began showing up almost immediately:  squirrel, raccoon, opossum, and mice, mostly.  It had been years since I’d had to analyze photos or camera footage, so I had to get accustomed to the camera’s capabilities and limitations, and learn how to differentiate masses of leaves and twigs from the shape of an actual animal, but I learned pretty quickly.  I’ve provided some examples of some of the early images we captured to illustrate just how effectively nocturnal wildlife can blend in with its surroundings.

See if you can spot, and then identify the mammals captured in these photos. Scroll down to see the answers!

We’ve just gotten started, but we’re making a lot of progress already.  Every week when I arrive at the site, I monitor the area around the den for scat, tracks, and other signs of life.  I look at the den, careful not to touch or disturb anything.  I check the camera and its battery reserve.  I’m always excited to pull the SD card and see what’s happened over the past seven days, and who’s shown up down at the creek.  Creekside habitats support a huge variety of life, from macroinvertebrates that live in the water – like sowbugs – to raccoon, fox, and deer.  Even birds benefit.  Kingfishers ply their trade on the unsuspecting minnows trapped in the still waters where the creek’s flow has been diverted, and at night, owls pluck mice from the downed limbs that rest over the water.

Once you start to see the chain of relationships between these different organisms, you get an idea of the “web of life” in this habitat.  Or any habitat, for that matter.  Ultimately, the more you observe your natural surroundings, the more they become a part of you.  Learning about them allows us care for these creatures by caring for the world around them.  It’s a ripple effect, like a pebble dropped into a creek.

Stay tuned for regular updates on this project!